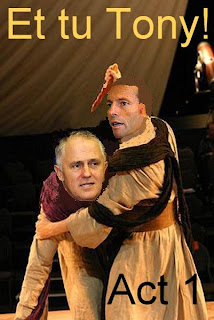 from Waynes Word on Web, 19.09.10
Act 1
Scene 1
The opposition to stable government begins it's destructive behaviour with an act of betrayal.
The lead actor denies the treachery and points to a woman, making fresh allegations of a similar act
"You backstabber!" he cries
"Down with your illegitimate rule."
-------------------- 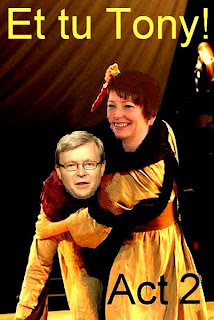 from Waynes Word on Web, 16.09.10
"Sink the NBN Admiral Turn-bull!" came the call
"Aye, aye your Majesty" the dutiful reply echoed
Before you could keel haul a land lubber, the brave Admiral climbed the nearest mast and began rattling his sabre towards the enemy.
This could be a scene from a Monty Python script if it wasn't so absurd. No sooner than the sounds of Tony's promises, of establishing a responcible opposition, are fading from ones ears, the man who was deposed by a nice knifing in the back is commissioned to destroy one of the newly elected governments main infrastructure building programs. We, the gullible public, had just finished listening to a disgruntled coalition on how ridiculous it was that Kevin Rudd could be reinstated with an important role in the Gillard Ministries, because of way he was deposed, when Malcomb is elevated by Tony who had done the same thing to him.
When we have all had to endure months of electioneering to decide which elected representatives are going to be allowed to form a government, so that they can get on with the business of ensuring the trains run on time, what is there in the grand scheme of things that makes Tony think that this is the way we expect him to behave? IMO there must be some mechanism put in place to bring to heel an opposition that refuses to accept the umpires decision and gets on with the task of positively building alternative policies, without resorting to the negative destructive behaviours we are now witnessing.
Posted by WWW at 7:56 PM No comments: 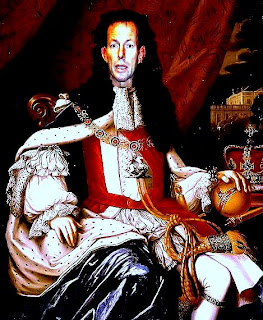 from Waynes Word on Web, 14.09.10
Some are born to rule and others have leadership thrust upon them.
In Australia we are privileged, in the sense that, the divine right to rule was never a part of our history except in the remote, via Britons paternalism. We like to think of ourselves as an independent lot ,even though England was responsible for our transplantation to the southern hemisphere. Therefore if a group can lay claim to privilege, it is because of their long term association with the growth and development of our nation. Take for instance the Church of England or the Roman Catholic Church, they have had a long and influential history exerting authority here in our Antipodean abode, but no one would dare to seriously suggest either should have the right to civic governance nor unchallenged policy proclamations for the country. If the laws concerning the separation of powers between church and state weren't established then it wouldn't be inconceivably that at some point, in the past, the Archbishop of Canterbury or the Pope could have been our God given head of state. But this, of course, never eventuated.
In reality, we have the Labour Party and the Liberal / National coalition and to some factional devotees, the progression to leadership in either of these powerful organizations is no less in importance than when the puff of white smoke appears over the Vatican. Without the approval of the majority of citizens a party faithful can rise with in the ranks and go on to ultimate rule, if the divinations of the party room are accurate.
Now I think, if most Australians would be horrified of fifty one percent of voters becoming Muslim and installing an Ayatollah as PM, or even fifty one percent becoming born again Christians and installing Benny Hinn as President, then we should be just as outraged when fanatical party faithfuls behave in a manor that suggests, if they get fifty one percent of the vote then their particular Guru has a mandate to dictate to the country as a whole as if we all voted for them.
With the advent of the New Paradigm staring us in the face, there are those who are happy to see the diffusion of power beginning to emerge and there are those who can't wait to get back to the old system of Divine Right to Rule. While your particular needs maybe presented to you as best being served by one party or the other, don't make the mistake of thinking all can be represented by one perspective and no matter how much you like the current incumbent, the next Heir Apparent may not be your cup of tea.
Posted by WWW at 5:03 PM No comments: 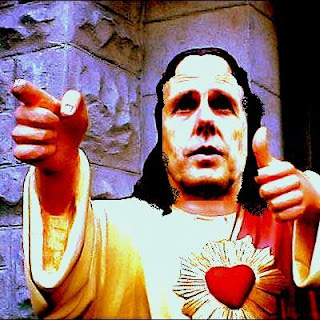 from Waynes Word on Web, 09.09.10
A new era dawns over Canberra with the instillation of a Gillard Labour Minority Government and many Australians are happy with the result. This unusual situation signals a victory for those who have been less than contented with the two party domination of our system. The only one's who seem to be distraught with it are the hard core Liberal / National Party coalition types, who are crying "we was robbed". You don't have to be an expert in kinesics to read the body language of the disgruntled and despite Tony Abbott's unconvincing promises of co-operation, one can be reasonably assured the 43.7% opposition will be doing everything in there power to destabilize the legitimate government (formed by the representatives of 56.3% of the population).
The problem here is a failure to recognise that the old paradigm was past it's used by date. We have been conditioned to assume the domination of one party over the rest is the best result and the logical conclusion of an election. But when that situation occurs 50%+ voters are represented by their MPs and 50%- voters have to eat worms for three years.
The new paradigm is an opportunity for all to be represented and if Tony (and the boy's and girls of the coalition) can rise above their desire to be an obstructionist force, then they are in no worse position than anybody else and can put forward their plans for going forward. They can set policy if their ideas are any good because the independents have made clear they will not support party politics on matters of policy. But some how or other I perceive their disenchantment is, they don't get to lord it over the defeated and Tony doesn't get to live in the lodge.
When Parliament resumes it will be an experiment in whether our politicians can rise above their petty individual beliefs on how Australia should be governed, prove themselves to be good people and join in the new paradigm of group co-operation to obtain the best results for the whole country. If they exhibit recalcitrant behaviour and sink to behaving like adolescent schoolies then we, the empowering public, should make it crystal clear they will not receive our endorsement on our next visit to the ballot box.
Posted by WWW at 7:42 AM 1 comment: